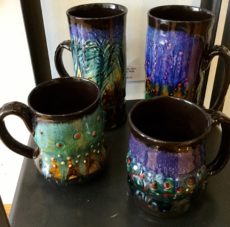 Miles always thought of making art that would be timeless; that is what drives him to learn technique, design and aesthetic. He is interested in making quality, decorative, yet functional art. Miles believes in really well crafted and decorative pottery that history will one day judge to still be excellent work. The enjoyment a customer gets while using one of his pieces is why he ultimately makes ceramic art. Buying his work is the ultimate compliment to him, and the personal relationship he can have with every purchaser is why he likes selling primarily at art fairs. Miles is very fortunate and honored to be a full time artist.  His work is primarily wheel thrown terra-cotta clay; while drying he brushes on a heavy application of white slip (liquid clay; yogurt consistency) which is also trailed and incised. After the bisque firing cone 06 (1850′ F), he brushes on seven to ten different glazes overlapping one another. The glaze firing happens in an electric kiln at cone 01 (2055′ F). All of the dripping and blending of the colors happens in the firing.

Miles attended the University of Michigan in Ann Arbor from 1994-1996, where he concentrated his studies on 2-D art, painting, drawing, and print making. For a short time from 1996 to 1998 Miles lived and worked in Chicago. After returning from the Windy City, Miles enrolled at Eastern Michigan University where he was seduced by pottery. From 1999-2001, while attending EMU he worked at Pewabic Pottery in Detroit, where he learned the technical skills needed to run his own studio. When Miles left Pewabic in 2001 he started his own studio, Glazed Impressions, Inc. His first studio was in Pontiac, MI from 2001-2011. Miles lives and works in Berkley, MI. He bought a dilapidated building in 2011 and renovated it into his studio and gallery.