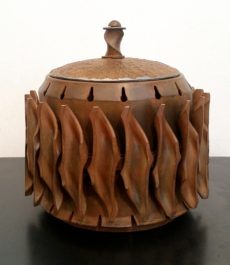 “As a smith, whether a blacksmith, metalsmith, silversmith, or the like; I feel that the most rewarding part of existing within these trades is that their foundation lies in the hands on manipulation of material and direct metal expression no matter its enthusiasm or its subtlety.  No mold making, no dry times, not even glue; just pick it up, heat it up, and make it.”

James Viste was raised on a farm in Wisconsin, received a Bachelors degree from The University of Wisconsin, La Crosse; and a M.F.A. from Cranbrook Academy of Art, Bloomfield Hills, MI.  He has worked for studios throughout Minnesota, Wisconsin, and Michigan.  He is currently the Manager of Edgewise Forge L.L.C., Detroit, MI; and employed as an instructor/technician by the College for Creative Studies, Detroit, MI.  His work has been exhibited in a variety of forums since 1986.